MINDANAO, Philippines — In the remote mountain village of Ned, on the southern Philippine island of Mindanao, the arrival of heavy machinery signals that development is underway on a controversial, long-planned coal mine.

Villager Jimmy Batilaran Jr. said that at least 40 earthmoving machines, including dump trucks and backhoes, have been deployed to the mine’s development site since July.

“They operate even in the dead of the night,” he says. “Their dump trucks have been hauling at 1 in the morning, disturbing the community with the noise.”

The company estimates the mine can yield 180 million metric tons of coal. But some tribal communities, environment groups and the local Catholic Church oppose the project, citing concerns over the environment, food security and displacement of Indigenous peoples in the area.

The arrival of heavy equipment in Ned comes after South Cotabato, the province where most of the deposits lie, endorsed the project in December 2021.

The combined mining areas of the three companies cover some 17,000 hectares (42,000 acres) in an area known to locals as the Daguma Mountain Range.

Most of the concession falls within Ned, a village of around 41,800 hectares (103,300 acres) that is currently home to corporate coffee plantations and other cash crops cultivated by tribal communities such as corn, peanut and sweet potato.

In endorsing the mining contracts, South Cotabato’s provincial board said the project “will foremost address the hazards caused by the persistent spontaneous combustion resulting to the activity called ‘burning ground’ that causes significant lung and health problems and ‘tension cracks’ that destroy roads and cause landslides.”

Tension cracks, which form when part of a slope shears off due to underlying instability, have long been an issue in the area, leading government geologists to push for relocation of homes and other infrastructure, and also to call for the extraction of impermeable layers of coal as potential solution.

However, campaigners say mining will cause more problems than it might solve. “The company will be mining ‘brown coal’ — the dirtiest kind of coal there is,” said Cerilo Casicas, a Catholic bishop who is among those leading the campaign to stop the coal mining project.

During the Oct. 5 launch of a petition against the mine, Casicas said the project “will critically impact the ecology and farming activities downstream.”

Any damage to these rivers, especially the Allah which is one of the island’s biggest river systems and a major source of irrigation, could affect “millions of people across Mindanao,” campaigners say.

The T’boli-Manobo S’daf Claimants Organization (TAMASCO), an Indigenous community based in the village of Ned, has opposed the proposed coal project in their ancestral domain for more than a decade.

“We disapprove of these coal projects for they contradict our indigenous worldview, which treats nature as a sacred source of life,” TAMASCO chief Datu Dande Danyan said in a press statement. “We do not need these projects, which only use up the natural resources which we should be taking care of.”

Tribal lives have already been lost in the struggle to protect their lands.

In December 2017, the Philippine armed forces killed tribal chieftain Datu Victor Danyan and six other tribal members in the village. The victims’ relatives said they were massacred, while the military said they were communist supporters and died during a legitimate tactical operation.

Apparently in recognition of the struggle of TAMASCO as well as the environmental impact of the coal mining project, the South Cotabato government specifically excluded the TAMASCO area and all other formally recognized watersheds from their endorsement, “unless all necessary documents are complied with.” 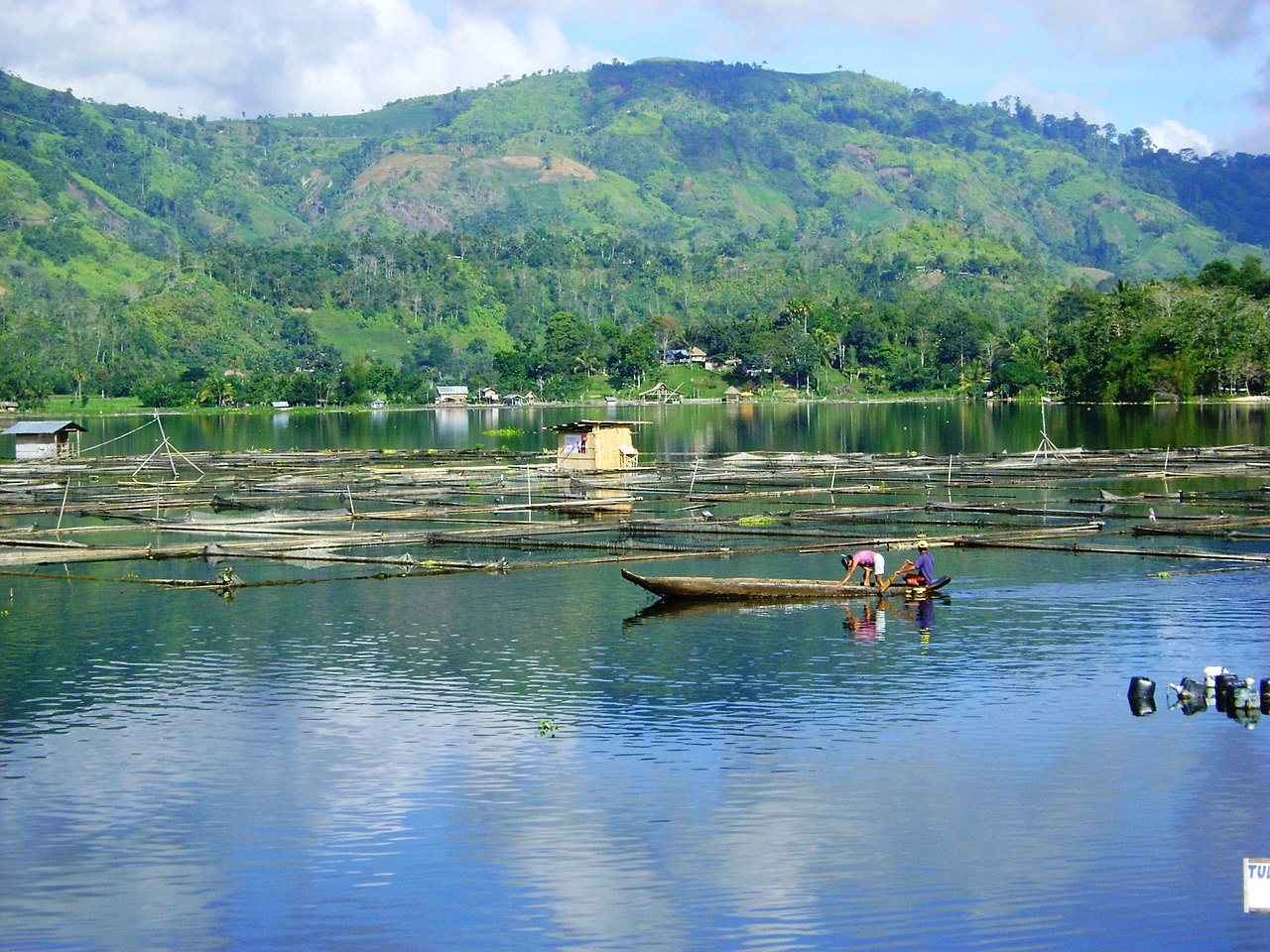 Lake Sebu near the village of Ned in Mindanao. Image by Peter V. Sanchez via Wikimedia Commons (CC BY-SA 3.0).

Batilaran, a non-tribal resident of Ned, whose family owns about 30 hectares (70 acres) of agricultural land affected by the coal mining operation, said San Miguel has been buying land at 80,000 pesos ($1,360) per hectare, or about $550 per acre — a price he said “many of the landowners have bitten since it appears that the coal mining operation is unstoppable.”

Batilaran said his family are among the few landowners standing in the way of the mining company, since the offer was “unfairly priced” and those who sell will permanently lose land rights. “Our family is willing to sell at 1 million pesos [$17,000] per hectare,” or $6,800 per acre, he said. “Landowners must dictate the price and not the buyer.”

Village official Lef Bantal said the company has raised the buying price to 120,000 pesos ($2,040) per hectare, or $825 per acre. She said many tribal residents of the hamlet of Aboy have already sold their land because of the cash offer and “the promise by the company that they would be prioritized in the hiring process.”

Most tribal members have little formal education, and would likely be hired for hard labor such as construction of facilities, observers say.

Notwithstanding the land pricing, Batilaran said his family would prefer that the coal mining project be halted because it sits within protected watershed areas, which, once destroyed, would have debilitating environmental and agricultural impacts, especially to small-scale farmers.

Opponents of the project also say the mine should be blocked under a provincial ban on open-pit mining.

The ban, approved in 2010, has held back another major mining project in South Cotabato — that of Sagittarius Mines Inc., operator of the Tampakan project, the largest untapped copper and gold minefield in Southeast Asia.

Earlier this year, the South Cotabato provincial board lifted the ban on open-pit mining, but the provincial governor, Reynaldo Tamayo Jr,. vetoed the measure, keeping the ban in place.

In approving the San Miguel mining contracts, the South Cotabato provincial board said the operator will employ “strip mining with progressive rehabilitation,” not open-pit mining.

“Open-pit mining includes strip mining; you call them different names but they are the same,” Casicas said.

The province’s environmental code defines open-pit mining as “a method of extracting rock or minerals from the earth by their removal from an open pit or burrow,” noting the term is used “to differentiate this form of mining from extractive methods that require tunneling into the earth.”

During a deliberation over the project’s status in December 2021, San Miguel CEO Ramon S. Ang said the company’s plans to strip mine don’t run afoul of the open-pit mining ban.

“Coal cannot be mined using open-pit mining method because such mineral is soft,” he said. “You can’t operate from the top because it will collapse. You can only operate from the side, you strip it … Our coal mining operation will not be an open-pit operation.”

Ang said they plan to mine 100 hectares (247 acres) in the first five years of extraction.

The business tycoon also announced plans to build a mine-mouth coal power plant that would feed into the grid, helping lower the price of electricity in Mindanao. He said the tribal and non-tribal villagers displaced by the coal mining operation would be provided with land and a house in a relocation site, and would be hired as workers depending on their qualifications.

Once the mining has run its course, Ang said, the company will fill in the land with topsoil for agricultural applications. He suggested the possibility of establishing an oil palm plantation in the area.

Banner image: Activists and Indigenous peoples holding a protest in front of the South Cotabato provincial capital in Koronadal City against coal mining and other issues. Image by Bong S. Sarmiento.

FEEDBACK: Use this form to send a message to the author of this post. If you want to post a public comment, you can do that at the bottom of the page.

Wisconsin soybean program looks ahead after loss of leader