With its fertile soils, favourable climate and ample rainfall, Guinea should be one of Africa’s biggest food-producing nations. But it isn’t – at least not yet.

The west African country’s potential for agricultural production is enormous, yet it has been held back by decades of political turmoil and a chronic lack of investment.

Amid competition for land, successive governments have focused more attention on major foreign investment in the lucrative mining industry, which contributes about 35% to GDP.

The colonel was sworn in as Guinea’s interim president and he later announced a transition period to civilian rule of 36 months.

In October this year, Guinea’s Ministry of Agriculture published photos of Col Doumbouya driving a red tractor during a visit to his 59ha farm in Fanye, Forécariah prefecture, which produces pineapples, cassava, groundnut, beans, okra and rice.

The visit sparked a lively reaction on Facebook; one blogger praised the transitional president for promoting agriculture, which “is in the interests of Guineans”, while another suggested that “it is through his agricultural policy that he is expected to make Guinea an agricultural power”.

Col Doumbouya’s farm photoshoot was published a week after a delegation of British agricultural journalists, including me, visited Guinea to see first-hand the challenges faced by its farmers.

Mr Souaré is also chairman of the Association of Media and Agriculture for Rural Development (Amedar), a network of a dozen Guinean farming journalists, whose objective is to promote understanding of Guinea’s farming industry and share knowledge.

During the tour, we met several everyday farming heroes who are trying to develop and raise awareness of their sectors (see case studies below).

These included an agronomy company owner who trains young apprentices to provide technical advice to farmers to support their crop husbandry, a livestock farmer who is rearing cattle on an extensive grazing system and a disabled man who is breeding rabbits and chicks and sharing his expertise with others through WhatsApp.

“There are lots of influential people like this in Guinea’s farming sector – they want to bring things to people,” said Mr Souaré.

“Everybody can change this situation. Citizens need to take good initiatives and bring them to the authorities. We all know that countries like Guinea are the future of the world.”

During a press briefing on 10 October, Guinea’s farm minister, Mamoudou Nagnalen Barry, said the new regime had doubled the national budget for agriculture and was focused on four key priorities: advisory services, mechanisation, access to credit/support grants, and inputs.

Mr Barry said his department must ensure that “everything that is promised is spent” in rural areas to allow farmers to do their jobs.

He highlighted mechanisation of agriculture as a key priority. Previously, the government bought about 500 tractors and combine harvesters for farmers to hire, but now only around 200 are in working order.

Many machines have been badly managed or deserted, which had held back the industry, he admitted.

Under the government’s agriculture development fund (Fonds de Développement Agricole), Mr Barry said $20m (£16.3m) was being allocated this year to help farmers buy their own tractors or combines.

For the scheme, a farmer makes a 35% down-payment and pays the remaining 65% over the next few years to own the machine outright.

Sixty tractors had already been made available for the first trial this year. Mr Barry said demand was high.

Separately, the government has started to recruit 500 technical advisers, mostly from the capital Conakry, to train up and move to the country to provide advisory services on farms.

Mr Souaré welcomed his government’s commitments, but said the funding “must be serious, applied and followed according to the letter”.

He said it was a “positive step” that many important ministers were present to discuss the challenges with our delegation. But he added: “Farmers will judge them by their actions, not their words.”

Mr Souaré said: “Guinea should already have become the grain producers of western Africa and further afield across Africa, given the huge potential for agriculture that exists in this country. Senegal, the Ivory Coast, Nigeria, all these countries could be fed by Guinea.

“With all this water, ground, etc, Guinea has the potential to feed all the nations. It could be the Ukraine of west Africa in terms of its grain production.”

Agri-entrepreneur Diallo Amadou Tidiane remains passionate about finding better solutions for agronomy challenges in the field after more than 25 years in the business.

An agronomist by trade, after his university studies, he started his business in Sierra Leone in 1980, where he worked on developing farms, which compelled him to become a distributor of agricultural inputs “to give farmers solutions to their problems”.

The Tidiane Agriculture Company started selling agronomy products in Guinea in 1997 and has since opened counters across almost every prefecture to get closer to farmers.

The company is also represented elsewhere in Africa, notably in Liberia, Sierra Leone and Senegal.

Mr Tidiane has developed a value chain of all types of agricultural inputs across Guinea, including agrochemicals, seeds and fertilisers.

Tidiane Agriculture Company works within the framework of a public-private partnership with the technical services of Guinea’s Ministry of Agriculture.

It also collaborates with the Food and Agriculture Organisation of the UN and other international organisations and agronomy companies.

Mr Tidiane believes in sharing his vast experience with the next generation of agronomists. As such, he has set up a team of more than 25 young agricultural technicians. After their training, they are sent to different places of sales as farm advisers.

Mr Tidiane said: “I’m still fighting hard to find solutions. We have lots to do. We have everything nearby. We have water, the ground. There are lots of possibilities here.”

Livestock farmer Thierno Alsény Diallo has followed in his father’s farming footsteps and set up a successful business rearing beef cattle, goats and sheep in a traditional way. 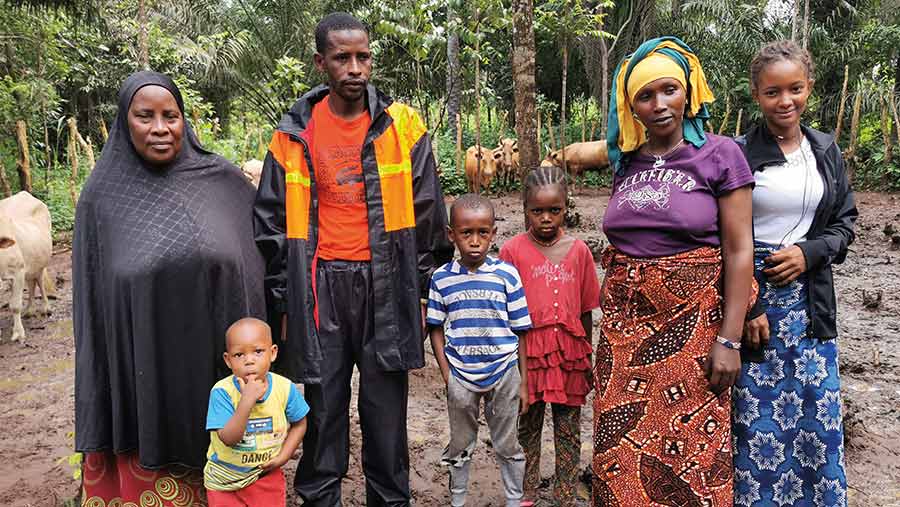 During the visit to his farm in Koba, Dubréka prefecture, Mr Diallo gave an insight into his beef cattle system. The N’Dama cow is a very placid and hardy breed with very few disease problems, which is very easy to manage in both wet and dry conditions.

Incredibly, the mothers can calve up to 19 years of age. On the morning our delegation visited, a cow had given birth to a bull calf in the night by natural birth.

During the dry season (November to May), the cows are taken to lower ground where they have access to water and there is still enough moisture in the grass.

However, during the rainy season (June to October), the herd spends more time in their enclosure at the farm’s base.

Because the breed is so placid, three bulls are uncastrated and can always be kept with the rest of the herd in the enclosure.

From the age of four to five years old, the cows are sold through intermediaries, collected by lorry and taken to an abattoir in Conakry for halal slaughter. The meat is then sold at points of sale in towns and villages.

The downside of this system is that the cows are not weighed, their meat yields are not high and there are too many intermediaries in the marketing system.

Breeding programmes are seeking to improve the performance of the cows by crossing them with larger breeds from Mali.

Mamadou Ramadane Diallo was involved in a serious road accident as a driver in 2001, which drastically reduced his mobility. 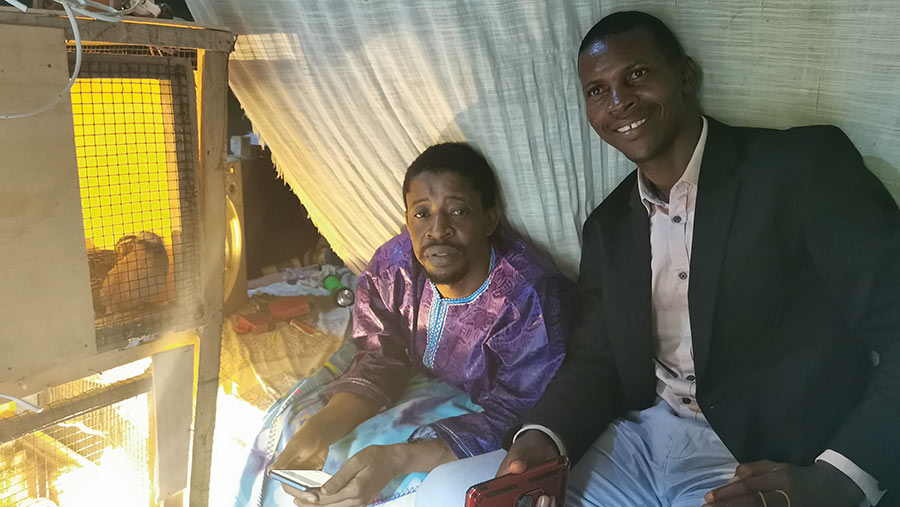 But he resolved not give up and would fight to support his family. He became an entrepreneur and is now one of a handful of professional rabbit breeders in Guinea.

Agriguinee.net was the first media company in Guinea to visit him and tell his story in March 2021. Many other media organisations have since followed suit.

Our host, Alpha Ousmane Souaré, who is also director of Agriguinee.net, said: “Mr Diallo has lots of projects. He is in the middle of evolving, fighting, little by little. Since we visited him, he has developed his business to breed chicks.”

Mr Diallo told Farmers Weekly: “In Guinea, I approach a lot of people who are interested in breeding rabbits and chicks to help them. Thanks to internet and WhatsApp, I can inform people.”

He is experimenting with different feed mixes and is working on a project to create his own incubators. He is seeking collaborators and investors to help develop his business.

Radio is a popular and effective way of communicating and sharing information between farmers and people living rural Guinea.

Zézé Zoumanigui, director-general of the press group City FM-La République, which is based in Conakry, said there are 76 private radio stations in Guinea, divided into two categories – 40 commercial and 36 community stations.

Now in sous prefectures, there are community radio stations managed by locals. Some programmes are interpreted into local languages and dialects.

Programmes have been developed that are dedicated to farming and rural topics. These air on a weekly basis.

“Everybody listens to the radio, including politicians, economists, and farmers. But farmers are a lot more interested in following the programmes dedicated to agriculture,” Mr Zoumanigui said.

Farmers Weekly thanks Amedar and the British Guild of Agricultural Journalists for making this press trip possible.

New GM flower and soybean varieties get USDA’s ‘thumbs up’

A harsh, cold wave weather pattern ahead for much of the Nation, centered on the Corn Belt

A harsh, cold wave weather pattern ahead for much of the Nation, centered on the Corn Belt