They were once the preserve of big, open grain fields in Australia, Canada, and the United States, but ultra-wide headers have become the new must-have on the latest high-output combines.

We’ve asked growers what benefits they get from these increasingly sophisticated attachments.

Having experienced two different types of “alternative” header before operating a draper unit for the past three harvests, Tom Carlisle’s answer to the question of whether the family farming team would have another is unequivocal.

“We wouldn’t go back to an auger header,” he says. “The draper is so much better – a massive difference in oilseed rape, especially, in terms of the delivery and presentation of material to the elevator and to the threshing system.

“We get more productivity by having fewer stops and from having the crop pass through the combine more efficiently. And we’ve had no maintenance or other issues, so there is no reason to change from a draper.”

The farm’s 10.7m (35ft) John Deere 735D with rigid frame and knife fronts an S790i HillMaster rotary supplied by Farol and driven by Tom and his brother, Will, across 920ha of combinable crops.

The ability to cut low at speed, and consistent delivery to the elevator are attractions of the draper header © Peter Hill

Before that, there was an S680i with a Premium Flow auger header featuring a deep bed and a series of belts spanning the gap between knife and auger.

“The draper is quite a bit lighter than the Premium Flow and it is partly supported by twin wheels either side behind the frame for stability,” explains Mr Carlisle.

“When cutting very low, it shaves the field, running lightly on replaceable plastic sections that form a continuous skid beneath and just behind the knife.

“We got through a set of those last year, when we had a fair bit of laid crop on our flinty ground.

“That was unusual because, although we bale all the barley straw and some of the wheat, we normally leave a 15-20cm stubble, especially before min-till or direct-drilling oilseed rape as a measure against flea beetle,” he says.

“One feature that really helps when cutting a crop with laid areas is the ability to pitch the header down hydraulically with a button on the controller.

“That gets the knife cutting as low as you dare, while keeping the header overall at a comfortable height; and then you bring the knife back up with another flick for standing crop.” 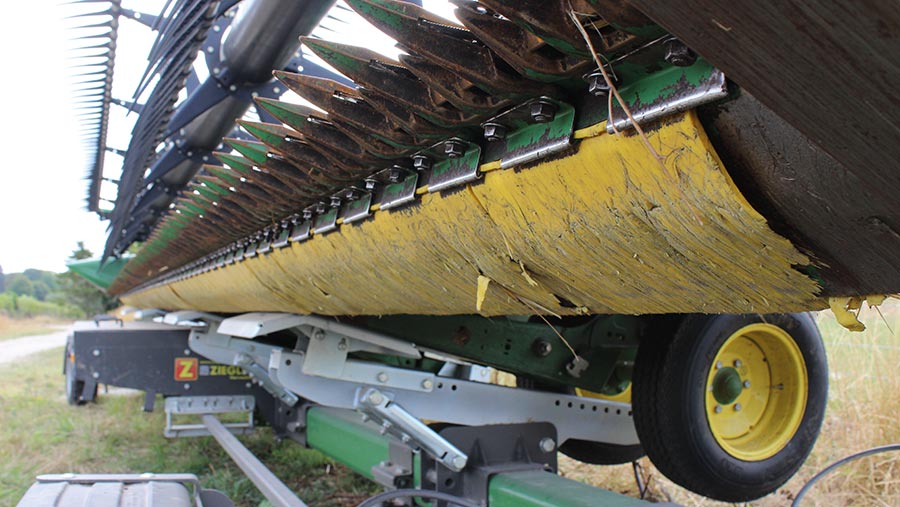 However, the core feature is the draper principle, using two deep belts to bring crop to the elevator.

The only auger involved is one positioned high along the back of the header frame to help contain tall and bulky oilseed rape and keep it heading in the right direction.

“The belts work really well in terms of conveying a lot of crop, especially oilseed rape, into the combine,” says Mr Carlisle.

“The crop falls square onto the belts that convey it sideways, then the central feed belt, positioned lower in a well and running faster than the outer ones, takes it forwards to the elevator.

“So, the crop heads up to the rotor ears or pods first, which not only seems to be good for threshing, but also for straw quality.

“Our dealer’s mechanic reckons he can see a difference in the straw from a rotary with a draper header and one with an auger header because the crop goes through in a more orderly manner.”

Thanks to variable hydraulic drive, the speed of the lateral and central belts is adjustable from the cab, so the first setting-up task upon entering a crop is to get the relative speeds balanced for a quick and even feed into the elevator.

“Generally speaking, we use a setting that is suitable for all the grain crops, and one for the oilseed rape that has the side belts running a bit slower because of the extra bulk.

“The only time we change speeds beyond that is when cutting a triangular section, say, and the crop is coming in from one side.

“In that case, we slow the side belts a bit more, otherwise you can have the crop overshooting or hitting the side of the well that the feed belt sits in, and sometimes the crop can be pulled in underneath by the empty belt.

“The only other situation you might get crop being snagged by the belts is when you go into barley or wheat that’s a bit damp or green – but that’s generally when you are being impatient and eager to get going when the crop or conditions aren’t quite right.”

No need to adjust tensioning

Otherwise, he says, the belt assembly on the Deere header keeps itself clear of underside debris and there has never been any call to adjust the tensioning mechanism in season to keep them running true or to take up slack.

“Once they’ve been checked and adjusted, if necessary, during the dealer’s pre-season service, that’s it,” says Mr Carlisle.

“We’ve only ever slackened off the side belts to replace a centre feed belt that was slashed by a flint last year.”

Positive transfer of crop from the feed belt into the elevator is helped by a retracting tine feed drum in an area that can get plugged on occasion.

“With the 635X header we had before, crop could be bunched up by the auger, so you were more likely to get a blockage and we could get through 15-20 snapped feeder drum fingers a year.

“With the draper header, we’ve had none – I guess because of the more even and consistent crop flow.”

Hydraulic drive to the 1,016mm-deep lateral belts can be adjusted infinitely up to 223m/min and slowed rapidly to a pre-set speed from the cab when coming out of the crop or cutting partial widths.

An auger of 420mm or 457mm diameter can be added to the top side of the belts, along with mechanically driven vertical side knives, for harvesting oilseed rape and similarly bulky crops.

A lateral tilt feeder housing that adds 4deg of movement to the 6deg provided by the HydraFloat pressure control system is recommended to get the full benefit of the header levelling system on sloping or uneven terrain.

FDA adds Listeria outbreak to its list; 9 other investigations continue