They were once the preserve of big, open grain fields in Australia, Canada, and the United States, but ultra-wide headers have become the new must-have on latest high-output combines. We’ve asked growers what benefits they get from these increasingly sophisticated attachments.

“For one thing, it has opened up opportunities for increased productivity. And for another,” he jokes, “you have to consciously stop to go for a pee; previously, digging the header into the ground every so often gave you plenty of opportunities for that.”

Greenshields Agri farms more than 3,300ha along the coastal plain east of Edinburgh, and on much of the land there is barely a flat field to be seen, with steep rolling terrain particularly prevalent in the Dunbar area.

The combine fleet, comprising a John Deere 690i, a Claas Lexion 780 and a Lexion 8900, have a busy workload, munching their way through more than 560ha of spring barley and 1,200ha of winter wheat, both including a large proportion of contract harvesting.

“We previously ran four combines, but the John Deere T-series HillMaster with a 7.6m table we sold last year was only used to open up and cut the end bouts in situations where a 12m rigid table would dig in and bulldoze,” explains Mr Sands.

“With the ground-hugging characteristics of the MacDon, that’s no longer a problem, so we cashed it in.”

With 31 years’ combining experience behind him, watching YouTube videos of the headers built by MacDon Industries in Winnipeg, Canada, convinced Mr Sands there were strong practical and economical arguments for them playing a role in south-east Scotland. And so it has proved.

“We ordered a 12.2m FD2 FlexDraper to go on our new Lexion 8900 last year. It didn’t arrive for the start of harvest – Rickerby was very good about sourcing a Claas header to tide us over – but when it did arrive through Lloyds, it immediately made an impression.

“We run the two Lexions together to simplify trailer logistics, and the MacDon was so good the 8900 simply powered ahead. You could really push on to make the most of the combine’s potential, confident the header would keep you out of trouble.”

Such was the impression, and also the imbalance in performance between the two combines, that for this year’s harvest it was decided to transfer the 12.2m header to the 780 to boost its performance and order a 13.7m example for the 8900 to maintain its output at a slower ground speed.

The wider model comes with a central reel and two either side that match the pivoting wings, so there is no centre support interrupting the view to the knife and bed, says Mr Sands.

“It also means you can position the central reel differently from the outer two, if necessary, to take account of the greater bulk of material at the centre.”

The way the 1.27m-deep draper belts deliver crop to the elevator is an attraction in itself, he adds, because everything is presented ears first, resulting in more efficient threshing.

The header cuts well too. “We’ve been able to harvest spring barley and oats well into the evening when it’s damp and a sea haar comes in, or when it starts raining.

“And the reel does a great job picking up a laid crop and feeding it on to the belts. Oats, in particular, can be a pig to cut, but this header has transformed that.”

A key feature of the MacDon header is its pivoting frame and finely balanced coil spring suspension, which is integrated with, but operates independently from, the combine’s header height control system.

Carrying up to 97% of the header’s weight, this purely mechanical system enables the header to run light on multiple pads beneath the cutterbar and skim the surface cutting short stubbles while the articulated frame adapts to contours.

“With a rigid header, I’d go through two or three knife sections a day from digging in, but with the MacDon last year, I had just one chipped section and never had to pull soil off the table,” says Mr Sands. 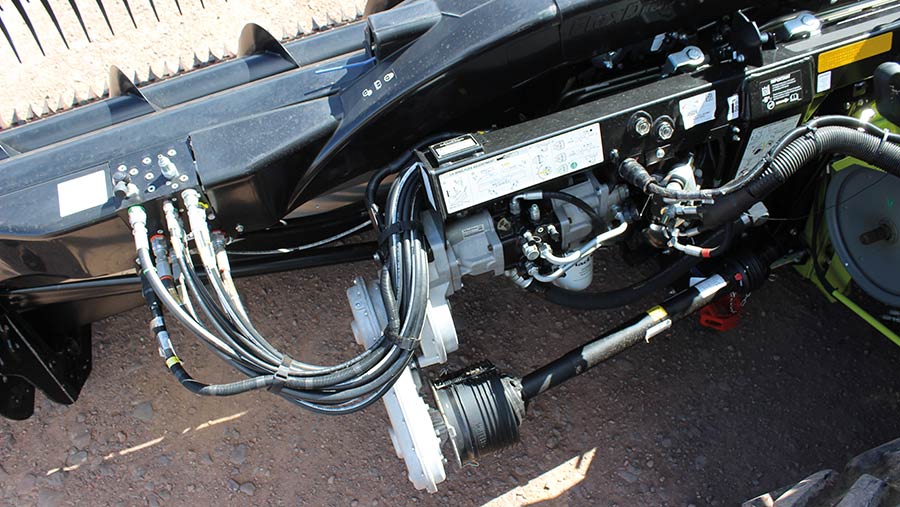 Being able to confidently cut 50-75mm stubbles when previous headers had to be set higher to avoid bulldozing is also an advantage for a business that bales 80% of its own straw to bed down about 1,000 head of beef cattle housed on a bed-and-breakfast basis, and supplies neighbours in return for muck that reinvigorates the land.

Plus, short stubbles help with subsequent cultivations, especially where minimum tillage techniques are used within the rotation.

“And it’s good for the operator, too,” he adds. “Driving the combine is much less tiring, especially at night, because you know the header can take care of itself.”

The MacDon articulated-frame draper has undergone an extensive redesign for the new FD2 version, while maintaining the principles of the original.

An updated frame, designed to be stronger and more durable, carries deeper draper belts – 1,270mm versus 1,070mm for extra conveying capacity – while increased use of aluminium limits the weight increase.

There is also a new cutterbar with hydraulic rather than belt drive, faster cutting speeds and different knife sections with 25% more cutting surface, all to handle faster working speeds.

A shorter knife-to-draper distance, a draper deck seal said to be easier to adjust and service, and increased flexibility are also part of the revamp. And a triple reel arrangement, which eliminates the central support of a twin reel setup, is available on more sizes.

In addition to these and numerous detail changes, a vertical side knife option by MacDon is available for the first time.

Other articulated frame draper headers include the John Deere HDX and the Geringhoff TruFlex with Razor flexible knife and Air seed-retaining airflow options.